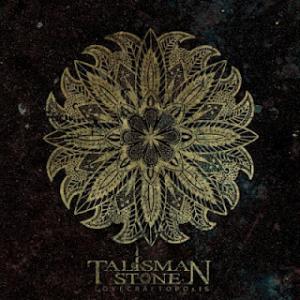 Italian Trio TALISMAN STONE for sure is not your average Stoner Rock Band with a noticeable psychedelic influence. For one, Erica Bassani (Vocals and 4 strings bass guitar), Andrea Giuliani (Vocals, 5 strings bass guitar and sitar) and Lucia Centolani (Drums and tabla) are 2/3 female and in addition to their two basses they like to sprinkle a tasty touch of traditional sounds to their tunes.

The four songs on “Lovecraftopolis” with the determining bass-lines are all set in the down-temp area. The vocals of Erica clearly contrast from the very low tuned instruments, specially when her male counterpart Andrea joins in with his rather low voice. A true highlight on this EP is the intro part of the third track “Power Is A Splendid Shroud”, where sitar, tabla and flute are used. Their slow and powerful work will lay upon you like a hypnotic mantra, all under the lucid vail of the ever present bass. The final song is called “Lovecraftopolis (Part I)”, which might be a hint for a future conclusion or resumption…

Founded in the cold winter of 2007 by Andrea Giuliani and Lucia Centolani, TALISMAN STONE where once known as the “White Stripes of Doom and Roll”. Produced by Dorian Bones and published via Moonlight Records, “Lovecraftopolis” comes as a follow-up to the first full-length record “SUNYA”.