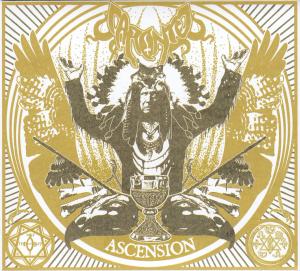 Feedback and distortion are not unknown to Occult Doom Rockers CARONTE and thus presented in every second of their current output “Ascension”. The Italian quartette offers a well-selected blend of Aleister Crowley spirit, a twist of Voodoo and your finest choice of genre influences, such as BLACK SABBATH, DANZIG, PENTAGRAM, SAINT VITUS, COUGH and so on. The most defining momentum happens to be set in the operesque-like baritone of Dorian Bones. Accompanied by Tony Bones (Guitars & Chorus), Henry Bones (Desecrator Bass) and Mike De Chirico (Drums) the vocals of Dorian become as one with the others and an instrument itself. A memory of ELECTRIC WIZARD’s “Black Mass” quietly echos in his high ranges, whilst the low-level has a quality of its very own.

The lyrics on “Ascension” are incentrated on esotericism and occultism, turning the seven tracks into a metaphysic yet horrific novel which tells the tale of Satan and Lucifer.

Published via Moonlight Records‘ sublabel Lo-Fi Creatures, “Ascension” comes in an appealing digipack. A profound completion to the bands’ concept.